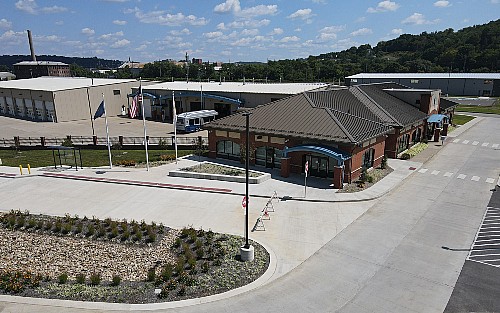 Butler Transit Authority (BTA) would like to welcome the public to an open house on September 13, 2022 from 2:30 pm -3:30 pm at 130 Hollywood Drive in Butler. The Authority is celebrating the completion of its facility additions and park n ride.

The new park n ride lot added 47 parking spaces for commuters. It was constructed adjacent to the Authority’s current parking lot which also had a 24-space expansion. Two bus shelters were added to the new bus boarding area.

Outside the waiting area, three new flag poles are proudly displayed. The United States flag, Pennsylvania flag, and a flag commemorating Pullman Standard are being flown.

The Authority’s facility is located on the site of the former Pullman Standard freight car company. In addition to the restored covered Pullman Standard hopper car that permanently resides on the Authority’s grounds, a new historical display was created for the new passenger waiting area. The Pullman Standard Historical Society has worked diligently to keep Butler’s history alive with the display that contains photos with narrative, memorabilia and more.

The project investment is approximately $3 million with 80% of funding coming from the federal government and the other 20% from state and local sources. BTA would like to thank the Federal Transit Administration, the PA Bureau of Public Transportation, and the County of Butler.